Gout and pseudogout—calcium pyrophosphate deposition disease (CPPD)—are two types of crystalline arthropathies which are disease processes that cause sore joints because salt crystals have formed in the joint. The crystals irritate the joints and sometimes surrounding tendons, causing the body to release chemicals that make the joints swollen and red. In gout, the salt produced is monosodium urate, while in pseudogout it is calcium pyrophosphate.

Both gout and pseudogout (CPPD) can affect joints outside the hand. In gout, the first joint affected is often the big toe. In pseudogout, the joints involved tend to be large joints such as the knee or wrist. Attacks can recur.

In gout, crystals develop when patients over-produce or under-excrete uric acid. Certain medications can cause rapid changes in uric acid level. These include certain blood pressure medications, diuretics, intravenous blood thinners, and a medication used for transplant patients called cyclosporin. Alcohol also increases uric acid production. Hypothyroidism, heart disease, and kidney disease have also been shown to be associated with gout. Attacks of gout have been noted after injury, surgery, infection, and the use of contrast materials for x-rays.

Calcium pyrophospate disease—CPPD—has been noted in patients who have multiple injuries to a joint, though many patients will not have any injury prior to an attack. Unlike gout, CPPD is not associated with alcohol or dietary habits and is not induced by medications. It can occur with certain diseases like pneumonia, heart attacks, and strokes and may occur after an unrelated surgery. CPPD has been found in patients with problems with their thyroid or parathyroid and patients with iron overload (hemochromatosis).

Gout/CPPD in the hand, wrist and elbow

The elbow, wrist, and small finger joints (DIP joints) are common sites for gout. CPPD is more common in the wrist.

Both gout and pseudogout tend to present with the sudden onset of a hot, red, swollen joint. The joints are so tender that patients are reluctant to move them. Often, the affected joints appear infected.

Gout may cause crystals to form white nodules called “tophi” that are often visible under the skin (see Figure 1). If the skin is too swollen and stretched out, a white chalky substance may ooze from the joint.

The crystals in pseudogout are usually only visible on x-ray.

How is the diagnosis made?

The diagnosis for either disease is made based on clinical examination, x-rays, and lab tests. You will be asked questions about your symptoms and how the disease has affected your activities. Because medications and other diseases can cause gout and CPPD, you will be asked to provide a detailed medical history and an accurate medication list. A detailed examination of your hands is important as the clinical appearance helps to clarify the type of arthritis. X-rays are also helpful. Calcifications within the wrist in the region of a ligament called the triangular fibrocartilage complex (TFCC) are classic for CPPD. Uric acid does not show up on X-rays, but bone erosions at the end joint (DIP joint) are characteristic of gout (see Figure 2). Over time, both disorders can show more advanced arthritic changes.

When possible, the best means to clarify the diagnosis is to obtain fluid from the joint. The fluid can be sent to the laboratory to see if it contains uric acid or calcium pyrophosphate crystals. A special microscope is needed to determine which type of crystal is present in the joint fluid.

Blood tests may be ordered to check for infection as well as the uric acid level. However, uric acid levels in the blood are often normal despite an attack of gout. There is no blood test for CPPD.

How are gout and pseudogout treated?

The goal of treatment for gout and CPPD is to decrease inflammation and relieve pain. Acute attacks are often treated with non-steroidal anti-inflammatory (NSAID) medication if the patient does not have other medical problems that preclude their use. Indomethacin is especially effective. When NSAID’s are contraindicated or not effective, colchicine is often helpful. Oral or injected steroids may sometimes be used, too.

Attacks of gout and pseudogout can recur. When the episodes are infrequent, an NSAID or colchicine can be used as needed for flare-ups. If the epi-sodes occur more frequently, other types of medications are often indicated. The specific type of medication is best decided by your primary care physician and/or a rheumatologist. Patients with gout may need agents that decrease the production of uric acid, such as allopurinol.

Gout and CPPD are often effectively treated non-operatively. In addition to medications, splints or compressive wraps may be helpful to decrease swelling and lessen pain.

If the disease has eroded the joints or if tendons have been compromised, surgery may be indicated to remove the crystals and stabilize the joint.

What happens if you do not receive treatment?

The acute attacks are so painful that most people seek treatment to relieve pain. Untreated gout can be very damaging to joints and tendons. The crystals can erode the joint to the point that it becomes unstable. Also, salt deposits on tendons just beneath the skin can cause the skin to break down and the tendons to rupture. This can lead to serious infections in addition to loss of motion.

CPPD crystals are less likely to be deposited beneath the skin, so infection is less likely. The chronic deposition of the crystal in ligaments and cartilage may lead to joint destruction. Loss of motion is common, but joint instability, as found in gout, is less frequent. 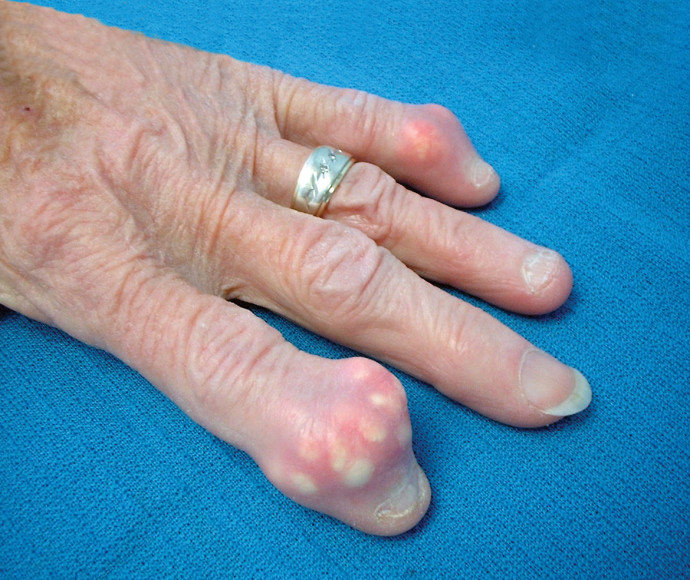 Figure 1: Gout with tophus formation in the index and little fingers 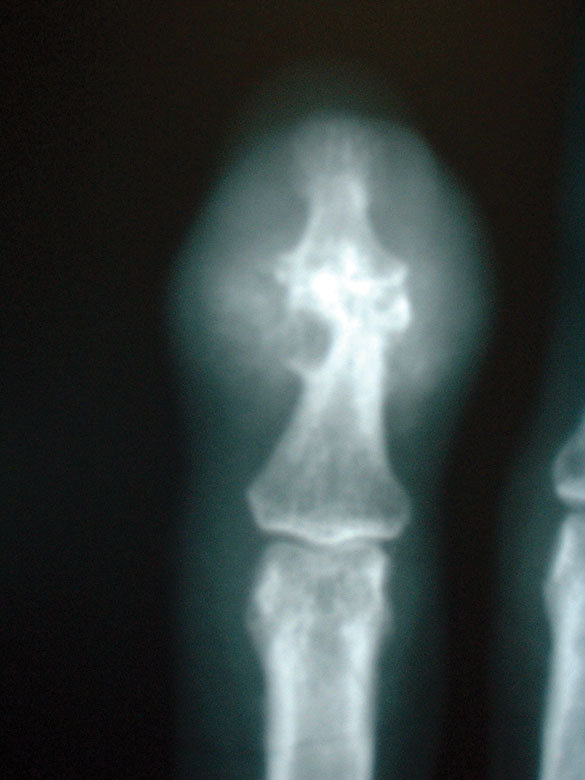 Figure 2: X-ray of finger with longstanding gout. Erosions are present in the bone at the end joint as well as swelling of the soft tissue.

© 2009 American Society for Surgery of the Hand. Developed by the ASSH Public Education Committee